Cecil College will be closed Monday, January 20, in observance of Martin Luther King, Jr. Day and will reopen on Tuesday, January 21, at 8:00 am.

Cecil College will be closed Monday, January 20, in observance of Martin Luther King, Jr. Day and will reopen on Tuesday, January 21, at 8:00 am. 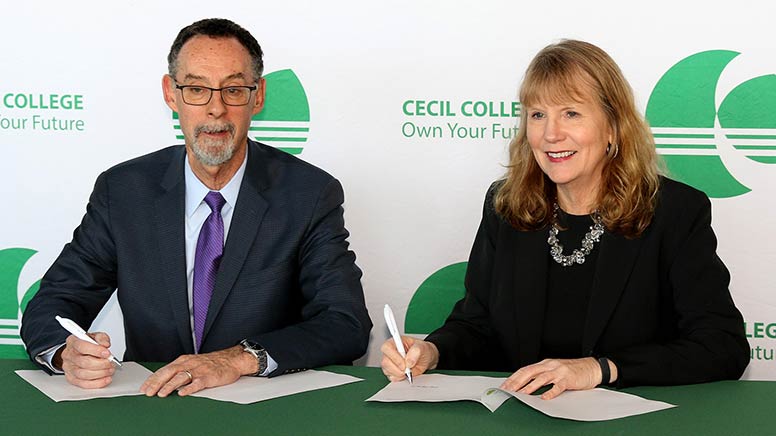 “Cecil’s ECA program significantly reduces barriers to degree attainment allowing students to successfully transition to four-year colleges and universities.  Partnering with West Chester University ensures our ECA students will continue to benefit from the support and high academic standards that will allow them to own their future,” said Cecil College President Dr. Mary Way Bolt.

This agreement provides a pathway for students who have successfully completed an Associate of Arts in General Studies at Cecil College to transition to a bachelor’s degree program at West Chester University. The agreement defines admission criteria and processes, course equivalencies, and academic advising services to support students in their transition from Cecil College to West Chester University.

“Cecil Community College is a forward-thinking institution that has established a unique model for student success,” said West Chester University President Dr. Christopher M. Fiorentino. “As an innovator in higher education, West Chester University looks forward to continuing this tradition, and providing a seamless transfer path for these students as they pursue rigorous academic studies in an environment that will encourage them to widen their angles of vision on the world and embrace all possibilities.”