Published on May 13, 2019 under Academics, Alumni, Faculty & Staff, General News 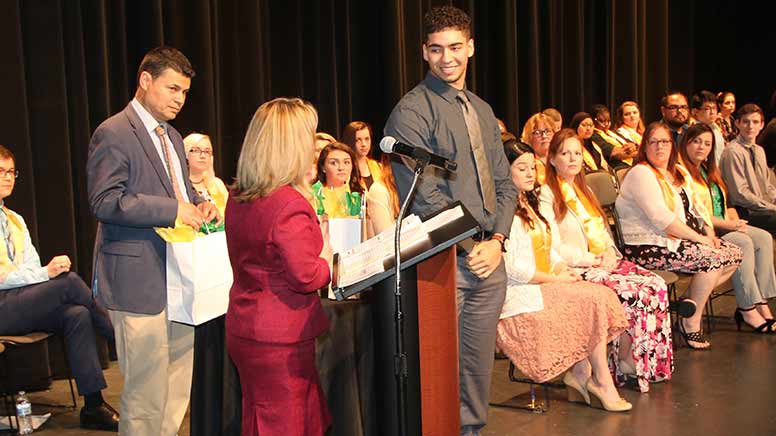 Associate Professor Adele Foltz presented Mohammed Bouceddi with the Department Award in Accounting on Thursday, May 9, during the 2019 Departmental Awards Ceremony in the Milburn Stone Theatre.

NORTH EAST, Md. – Cecil College hosted the 2019 Departmental Awards Ceremony in the Milburn Stone Theatre on Thursday, May 9, to honor graduating students who have excelled in their studies in a particular field. There were 19 students recognized by the faculty of the individual departments.

The Business Department presented Mohammed Bouceddi, of Elkton, Md., with the Department Award in Accounting.  Bouceddi will graduate with an Associate of Applied Science degree in accounting with plans to pursue his bachelor’s degree in accounting at University of Maryland University College (UMUC) this fall. His ultimate goal is to obtain a CPA certification and licensing. Recently Bouceddi competed for and secured a six-month accounting internship with Citizens Care Center in Havre de Grace, where he will gain valuable experience in all aspects of the profession.

Oscar Zarco’s creativity, enthusiasm, and academic success made him a standout student and natural selection for the Department Award in Art and Design. Excelling in both two dimensional and three-dimensional art courses, Zarco of Elkton, Md., is an inspiration to others in the classroom. He participated in numerous art events at the College and is recognized by the faculty and community for his outstanding work. His artwork was featured at the Elkton Station Gallery student exhibits and selected for the 2019 Arts and Communications Annual publication. He will continue his education at Temple University this fall.

Anthony Smith was presented with the Department Award in Biology for his exceptional dedication and academic excellence in the biological sciences. Smith is a member of Cecil College’s Alpha Alpha Theta Chapter of the Phi Theta Kappa Honor Society and serves as a biology and chemistry tutor, helping his peers achieve academic success.  His eagerness to learn and analytical nature will serve him well as he plans to attend the University of Maryland, Baltimore County (UMBC) in the fall.

Victoria Green of Elkton, Md., was presented the Departmental Award in Business Administration. She will graduate with an Associate of Arts degree in business administration having excelled in a rigorous course load while also working as an Events and Activities Assistant at Calvert Manor Healthcare Center. Green is currently enrolled at Wilmington University, pursuing a bachelor’s in human resource management. She maintains full-time employment with Calvert Manor having been promoted to Administrative Assistant / Accounts Payable Specialist. She is a member of Cecil College’s Alpha Alpha Theta Chapter of the Phi Theta Kappa Honor Society as well as the Wilmington University chapter of Sigma Beta Delta Honor Society.

Ethan Zack of Elkton, Md., was presented the Department Award in Science and Technology/Chemistry due to his aptitude for chemistry, having earned the highest score in the class on the exams this semester. Ethan assists classmates with the material and works as a Cecil College tutor. His curiosity comes from having taken upper-level classes in chemistry.

Michelle Keane of Elkton, Md., made a lasting impact at Cecil College and the broader community, earning her the 2019 Criminal Justice Department Award. She not only excelled in her academic ventures, but served as a dedicated Public Safety Officer with the Cecil College Department of Public Safety for two years. She is the recipient of the First Responder Award from the Cecil County Chamber of Commerce and participated in ALICE Active Assailant and self-defense training. Additionally, Keane earned certifications in CPR, NARCAN, OC spray, and First Aid along with becoming a certified LiveScan operator. She plans on attending University of Maryland – University College over the summer toward her Bachelor of Science degree in public safety administration, with a minor in diversity awareness.  Keane is in the hiring process with the Delaware State Police and will begin the hiring process with the Maryland State Police in October where she is presently serving an internship.

Jennifer Altvater of Elkton, Md., is one of those students who not only meticulously completes her coursework, but also maintains a stellar level of commitment, making her the ideal recipient of the Department Award in Education. As a future teacher, she will provide a joyous learning environment and inspire all of her students to reach their full potential.  Altvater’s dedication and commitment have prepared her to continue her studies at Towson University, where she plans to be a dual major in elementary and special education.

David Hamm III will graduate with Associate of Science degrees in engineering specializing in aerospace, civil, mechanical and general engineering. Hamm is a thorough and exemplary student that goes above and beyond in producing assignments, projects, presentations, and labs, earning him the Mathematics and Engineering Department Award. His mastery of engineering concepts has made him a leader during STEM community outreach events. Hamm plans to use his engineering skills at the University of Delaware in the civil and environmental engineering department.

Romeo Volpe of Elk Mills, Md., established himself as a hardworking, dedicated, and analytically-precise student. This has earned him the English Department Award at Cecil College. He engages not only his professors but his fellow students, fostering rapport among all. Volpe also routinely exceeds expectations, producing remarkably polished and well-reasoned writing, attending poetry readings and working far beyond the syllabus. Volpe plans to pursue a bachelor’s degree in social work at Salisbury University.

The Department of Business and Management Award was presented to Blake Griffith. Griffith, of Elkton, Md., is graduating with a double major in management and accounting, having excelled academically while maintaining a remarkable number of extra-curricular pursuits in support of the College and the community. He served as President of Cecil College’s Alpha Alpha Theta Chapter of the Phi Theta Kappa Honor Society, served on the Maryland Higher Education Commission’s Student Advisory Council, initiated and hosted weekly trivia nights at the College, and volunteered as Quidditch Master for the last three years at Rising Sun High School’s annual Harry Potter Night.  In June 2018, he accepted a position as Member Service Generalist with APGFCU, where he has been leveraging his education and gaining additional financial management skills.

Elizabeth Michalski, of Nottingham, Pa., was the recipient of the Department of Business and Marketing Award as she graduates with an Associate of Applied Science degree in marketing. She consistently gives her full focus and effort to each assignment while taking a rigorous course load including on-site, hybrid, and online course formats. Michalski started at Cecil while she was still in high school, taking advantage of dual enrollment classes.

The Department of Mathematics Award was presented this year to Port Deposit, Md., resident Erin Elburn, who is graduating with an Associate of Science in mathematics. In addition to excelling in her studies, she also served as a social media assistant for the College. She presented her Multivariable Calculus presentation on Kepler’s Laws at STEM Night.

Kristen Magaw, of Elkton, Md., was presented the Department of Nursing Award for her outstanding academic achievement along with her delivery of competent and compassionate nursing care. Magaw is also a member of Alpha Delta Nu, the honor society for associate degree nursing programs. She demonstrates many of the characteristics of a professional nurse: compassion, inquisitiveness, courage, perseverance, and application of innovative and thoughtful problem-solving to nursing.

The Department of Music Award was bestowed upon Port Deposit, Md., resident Brianna Sypolt, whose primary focus has been voice. She has made remarkable progress while exploring a variety of styles in her studies, ranging from classical to popular genres, and bringing enthusiasm and emotion to the stage for audiences to enjoy. Sypolt’s enthusiastic personality, which not only makes her an excellent student, also comes through in her singing, onstage presence, conversations, and support of other students. She is graduating with associate degrees in music, voice, and music education.

The Department of Theatre named Kali Craig, of North East, Md., as the recipient of this year’s department award. Craig excelled in her classes, especially her commitment to context analysis and character development which are evident in her performances. Her desire to learn every aspect of the theater beyond curriculum expectations has allowed her to grow. She served as stage manager for multiple non-department productions, painted sets, pulled costumes, and helped reorganize different areas of theater storage. In her spare time, she volunteered with the children’s theater program at the College.

Ethan Zack was presented the departmental award for excellence in physics. His devotion, hard work, and tenacity paid off as he challenged himself to probe the mysteries and wonders of physics. Zack was never satisfied with a concept or idea unless pursuing every angle and logical consequence of it. He plans to pursue a bachelor’s degree in STEM at the University of Maryland.

Albert Soo’s engagement, intellect, and conscientiousness as a student earned him the Department of Social Sciences’ Psychology Award. Soo, a Rising Sun, Md., resident, stands out academically, demonstrating a high level of abstract cognitive and behavioral understanding, fantastic writing abilities, and outstanding critical thinking skills. In an Abnormal Psychology course, Soo frequently assessed case studies of mental illness with professionalism, energy, and enthusiasm. His questions show curiosity, open-mindedness, and scientific inquiry, which will serve him as he seeks a bachelor’s degree in the fall.

The Department of Social Sciences’ Social Work Award was presented to Volpe. Volpe distinguished himself in his academic pursuits, but it is his laid back, personable style that has endeared the faculty and his classmates. In addition to being academically sound in his research and scholarship, he occasionally weaves in details from his personal life that leave his classmates in awe. His tales of his adventures frequently enhance other’s learning during class discussions, and his peers sit and listen, captivated by the stories. Volpe plans to transfer to Salisbury University to pursue his bachelor’s degree.

The Department of Visual Communications Award was presented to Aberdeen, Md., resident Jonathan Perez, who excels in both graphic design and three-dimensional design. He combined his abilities with a stunning body of work presented at the Cecil College Technology Exhibit. The images he produced were reminiscent of pixel-based artwork – they were flat, minimalistic and imaginative worlds that contained sharp, vector-based illustration techniques and creative patterns.