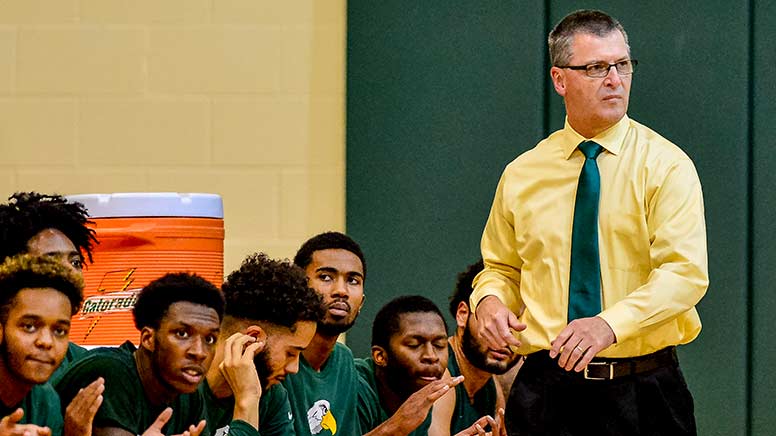 Durham was named the MD JUCO Coach of the Year. After coaching the Seahawks to the NJCAA National Tournament last year, Durham continued his success as the men’s program finished with a 23-7 overall record and went 12-1 to win the MD JUCO regular-season title.

“Working at Cecil College gives me an opportunity of giving back and helping the community that supported me when I was growing up. Not only students but anyone on this campus. We are a community of people who have the same goal of helping people succeed,” said Durham.

Durham was born in Elkton, raised in Middletown, Del., and spent his summers in Chesapeake City with his mother’s family. He graduated from Cecil College in 1983 before going on to earn his bachelor’s and master’s degrees from Wilmington College.

Jacob Falko, a native of North East, Md., and a product of Tri-State Christian Academy was the first of two players to be recognized for their excellence on the hardwood. Along with being named First Team All-MD JUCO in his sophomore year, Falko was named this season’s MD JUCO Offensive Player of the Year.

During his second season with the Seahawks, Falko averaged 23.7 points per game while shooting an impressive 62 percent from the floor. From beyond the arc, he shot 43 percent. This shooting accuracy, along with his 5.7 rebound average and 4.2 assist average, earned him Player of the Month honors twice during the season. Falko is an accounting major.

Joining Falko on the awards podium was freshman forward Justin Cohen as a Second Team All-MD JUCO player. Cohen is a native of Marion Station, Md., where he attended Crisfield Academy and was named All-Bayside Player of the Year. Over a 30-game season, Cohen averaged 13.8 points with an impressive 48.6 percent shooting average. Under the boards, he averaged 6.9 rebounds. He is a general studies major.

The Cecil College women’s basketball team also had two of its players recognized for outstanding performances. Freshman guard Jayla Smith and sophomore guard Kayla Thompson were both selected to the Honorable Mention Team of All-MD JUCO.

Smith, a native of Smyrna, De., averaged 16.1 points and 8.7 rebounds to go with her 2.2 assists per game. A computer engineering major, she helped the Seahawks record the MD JUCO playoffs for the first time in two years.

Thompson averaged 15.2 points per game along with 4.9 rebounds and 3.5 assists. From the field, she shot 36.2 percent and 27.8 percent from beyond the three-point line. A native of Chesapeake City and graduate of Bohemia Manor High School, where she had a 1,000-point career, Thompson is an exercise science major.

Cecil College is actively monitoring the status of COVID-19 locally, regionally, and nationally. We are working with our local health department and county offices to stay up to date on the latest developments regarding the coronavirus. As of now, all classes and events on campus are taking place as scheduled.

The College is utilizing additional precautionary measures to maintain a healthful environment on all of our campuses. Our Facilities department has added additional cleaning protocols to their daily routine to help prevent the spread of germs, including the use of disinfectant wipes on high-traffic surfaces like door handles and light switches.

In addition, the College is routinely posting information regarding the prevention of germ transmission on all on-campus monitors, our student and employee newsletters, and our primary social media channels. We also have signage both on campus and on larger event promotions reminding the community that if someone isn’t feeling well or has recently traveled to any of the global, high-risk areas, the responsible thing to do is to stay home. The College continues to monitor updates from local, state and national public health officials and will update this message as necessary.