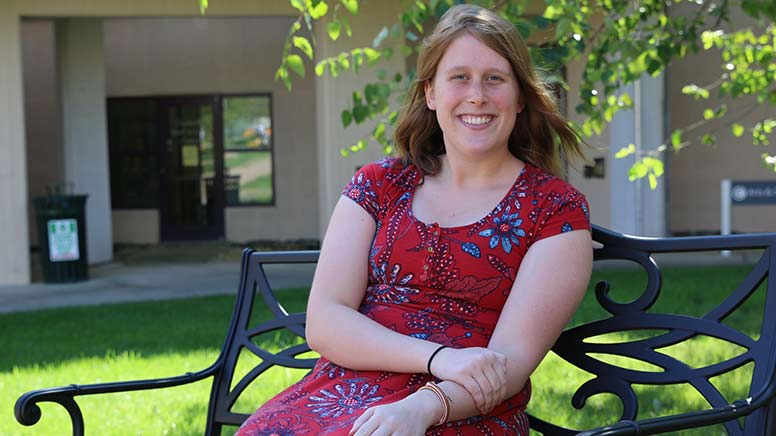 NORTH EAST, Md. – Growing up in Perryville (Md.), Sara La Cotti never thought she would one day walk in the footsteps of literary greats such as Oscar Wilde and T.E. Lawrence. At the age of 23, she found herself sitting in the same halls at Oxford University’s Exeter College where JRR Tolkien wrote the Hobbit.

“It was so surreal but amazing. I had to pinch myself jokingly,” said La Cotti, who was among a select few accepted into the 2018 Columbia University’s Publishing Course held in Oxford, England. “When you walked into our dining hall, it was like walking onto the set of a Harry Potter movie.”

The journey for La Cotti, a 2013 Perryville High School graduate, began when she met Cecil College’s Allison K. T. Symonds, a professor of English, in her first class. Feeling a bit shy coming from a small high school, La Cotti was intimidated by her surroundings. But she quickly found her path under the guidance of Symonds.

“She made it so easy to understand the English assignments. I tell her all the time that I chose English as a major because of her influence,” said La Cotti, giving reference to the proverb, “teachers open the door, but you must enter by yourself.”

La Cotti, daughter of Melissa La Cotti and the late Jon La Cotti, completed her Associate of Arts degree in general studies in 2015 and, with the confidence gained at Cecil College, transferred to Cleveland State University (CSU) on the recommendation of Symonds.

“When I started at Cecil, I didn’t know what I wanted to do. I found it silly to go to a four-year college and pay all that money when I could go just 10 minutes from home and get the same education without all the debt,” said La Cotti, who is proud she finished her associate degree debt free.

It was during her senior year at CSU that an English literature professor told her of the highly prestigious Columbia University’s Publishing Course. This is an intensive four-week book publishing workshop run through the graduate program of the Columbia University School of Journalism with hundreds applying for the 110 seats. With high hopes, La Cotti applied only to be rejected.

“I was heartbroken over not being selected, but I was graduating from college at the time, so I stayed focused on that,” said La Cotti, who returned to Perryville where she took a job at the Amazon Distribution Center.

Not to be deterred and remaining focused on her dream of working in the publishing field, La Cotti was accepted into the Northeastern Ohio Master of Fine Arts (NEO MFA) program for creative writing at CSU for Fall 2018. As for the Columbia Publishing Course, she decided to give it one last shot and to her delight was accepted for the September 2018 course with a twist. Columbia University had partnered with Oxford University to host a seminar for which La Cotti was to be a part.

Upon hearing the great news in July, La Cotti contacted CSU which was more than willing to delay her admission to allow one of its students to attend this prestigious program. Six weeks later, La Cotti found herself on the London to Oxford train.

“I was bubbling with excitement,” recalled La Cotti.

For the next four weeks, Sept. 2-28, she experienced one of the most exhilarating and intense schedules with 16-hour days filled with lectures, discussion panels, workshops, and group discussions with prominent A-List authors, writers, editors, publishing executives, scholars, and designers in the publishing industry.

During the final seven days known as Book Week, the 80 participants were separated into eight fictional publishing houses. Under the guidance of the facilitators, they formed a hierarchy with CEO, editors, designers, writers, and artists.

“We were a children’s publisher, and we had to publish six books in a week. The faculty members were there as advisors. We worked from 9:15 a.m. every day, and we didn’t leave until 3:30 in the morning some nights. Then we were back up at 7:45 for breakfast and back at the job,” said La Cotti, who published two books dealing with children’s grief and how to have fun without being mean. By the end of Book Week, La Cotti’s team had created 110 pages that were bound for the Rockhopper Books publishing company.

Along with providing insight into the publishing work by pulling back the curtain, La Cotti has a clear understanding of how to get her foot into the door of the major publishing houses. She says networking and “who you know” is vital to getting a job with one of the publishers, and literary publishers view this workshop as a proving ground for future hires. The participants were encouraged to network with the facilitators who were eager to get to know the students as this program has a 95 percent job placement for those who complete it.

“At the beginning, we all wanted to be editors but came out of the program wanting to do something else in the publishing field. I am interested in publicity, marketing, or other aspects of the field. It’s more than just sitting behind a desk and making a few changes to submitted works,” said La Cotti, who is to be published in the February 2019 issue of Split Lip Magazine.

As she ponders a bright future that will include a master’s degree, La Cotti continually looks back at a tiny community college tucked away in the corner of Maryland that helped her find her life’s passion.