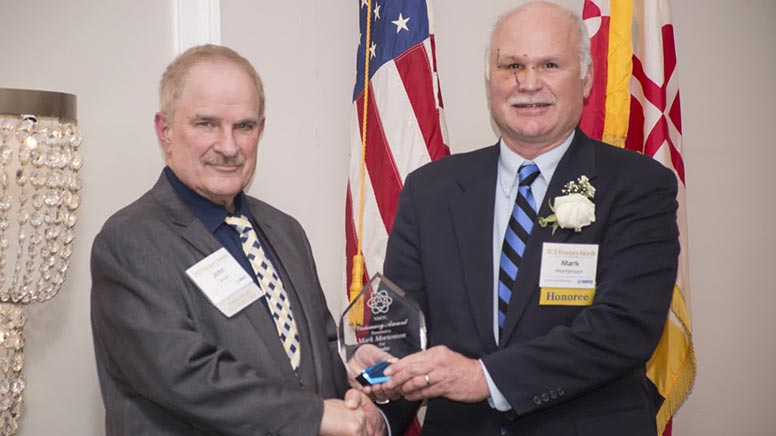 Mortenson, who is the Chair of the Board of Trustees at Cecil College, was the recipient of the Leader Award which acknowledges his steadfast, consistent contribution to the building of a STEM-educated workforce and advancing technology innovations  in a public forum while inspiring others to help in accomplishing shared goals.

NMTC connects collaborative leaders in academia, industry and the federal government to build a STEM educated workforce and advance innovation and technology to expand the state’s economy and protect national security.

“We are grateful to these individuals for volunteering their time and knowledge. Maryland’s economic infrastructure is increasingly driven by emerging and complex technology,” said John Casner, executive director of NMTC. “These individuals understand this technology and share their knowledge to create the workforce for the future.”

Under Mortenson’s guidance, Clene Nanomedicine has developed the Clean-Surface Nanosuspension technology platform. Clene Nanomedicine is in the process of developing a solution for Multiple Sclerosis (MS), which is in FDA human clinical trial.

“Everything I do is an attempt to help my neighbor. No matter where they live, everyone within Cecil County is my neighbor, and we should be working to improve their lives. To that end, it is a recognition of how important the college is, not only for students but the county. If the college is healthy and doing its job, the county will be healthier,” said Mortenson. Mortenson’s dedication to higher education was evident while he served as the chair of the Cecil College Foundation during its recent campaign of inspiration to raise $1.5 million in support of student success. Throughout his career, he has been asked to become involved with other institutions, but it wasn’t until he was asked to provide insight and inspiration at Cecil College that he found the opportunity to make the local community a better living and working environment.

“Cecil College is providing a betterment for the person down the street or within your family. These are the people in your life. It is not like a four-year college where the person is from another state. You are making the area around you a better place to live for not only yourself but everyone within the community,” said Mortenson.

Mortenson is very connected to the community having lived in Cecil County for more than 30 years. He currently resides in North East with his wife Julianna, where they raised four children.

Cecil College is actively monitoring the status of COVID-19 locally, regionally, and nationally. We are working with our local health department and county offices to stay up to date on the latest developments regarding the coronavirus. As of now, all classes and events on campus are taking place as scheduled.

The College is utilizing additional precautionary measures to maintain a healthful environment on all of our campuses. Our Facilities department has added additional cleaning protocols to their daily routine to help prevent the spread of germs, including the use of disinfectant wipes on high-traffic surfaces like door handles and light switches.

In addition, the College is routinely posting information regarding the prevention of germ transmission on all on-campus monitors, our student and employee newsletters, and our primary social media channels. We also have signage both on campus and on larger event promotions reminding the community that if someone isn’t feeling well or has recently traveled to any of the global, high-risk areas, the responsible thing to do is to stay home. The College continues to monitor updates from local, state and national public health officials and will update this message as necessary.