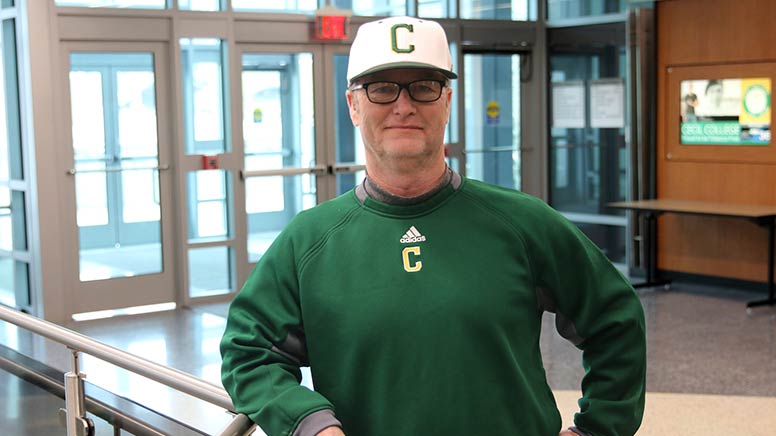 “I cannot think of a more deserving person than Charlie O’Brien for being elected into the NJCAA Baseball Coaches Hall of Fame. His dedication to the game, and his commitment to the student athletes that have played for him are second to none,” said Cecil College Director of Athletics Ed Durham. “Coach O’Brien has been committed to the Mission and Vision of Cecil College and its students. It shows on the baseball field, in the classroom, and in the community.”

O’Brien’s presence throughout the tri-state region goes far beyond the chalk lines on the baseball field. With more than 20 years of NJCAA coaching experience, O’Brien has made a difference in the lives of hundreds of students.

O’Brien is a product of Cecil College baseball, having been approached back in the 1980s by then coach George “Tom” Wilhide to try out for the Cecil Community College team. He played baseball at Cecil College from 1983-85 before going on to complete his bachelor’s degree from West Chester University.

Following a year of coaching at West Chester, O’Brien took the head coaching position at Keystone College in northern Pennsylvania, where his teams won 136 games. He returned to Cecil County in 1995 to take a job at the College and was named head coach in 1997. Under his guidance, the Seahawks have accumulated 586 victories, earning him the Maryland Junior College Conference Baseball Coach of the Year award three times. He was also a three-time recipient of the NJCAA Region XX Coach of the Year, and the 2011 NJCAA Northeast District Coach of the Year.

O’Brien, like many at Cecil College, is a strong advocate for community college education and providing a helping hand to a brighter future. Outside of his academic advisor duties at Cecil College, O’Brien has given back to the community through numerous avenues, including as a volunteer coach in the Maryland Little League.

“We, and I mean Cecil College, are community and student driven. The faculty and staff are here to make them better, and we do this by being accessible and doing anything we can to help them be successful,” said O’Brien. “A lot of people would think it is the buildings that make the college. I think it is the faculty and staff, the majority of which are here for the right reason: trying to take a kid from point A to point B.”

On the field, O’Brien’s coaching knowledge has impacted student-athletes far beyond Cecil College. He has committed time to the ABCA, the USA National Team, Olympic teams, and the Pan-Am Games. From 2008-2013, O’Brien was selected as the Maryland Junior College Baseball Coaches Association President.

But he hasn’t been alone on this journey. Right by his side was his wife of 26 years, Lynn. Along with their three children – Charles Jr., Katie, and Patrick – it has been a family affair.

“Anytime you have success, you have to give up a little bit of something and sometimes that is family life. There were certain things they had to sacrifice such as a vacation cut short or not taken. They are going into the hall of fame with me,” said O’Brien.

For more than 23 years, O’Brien has been working to pay it forward. As a baseball coach, he is very proud to have led his team to the 2011 College World Series. But as a mentor to young men, he is most proud of the impact and guidance he has been able to provide.

“Every year the changeover is incredible. We have kids who start here and don’t think they can pass a college class, and the next thing they know they are finishing their four-year degree. That is what hits me right here,” said O’Brien, pointing to his heart.