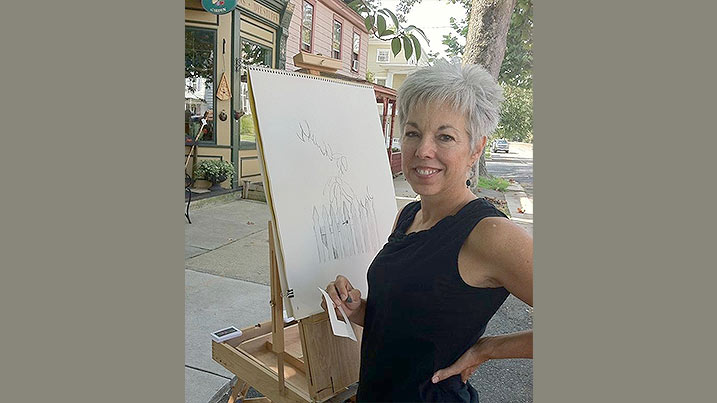 Join the Art 293 Professional Portfolio Production class in welcoming Patti Paulus, artist and co-founder of The Palette & the Page located in Elkton. Patti will talk about her work and professional journey in the art field and beyond on Friday, April 9, at 10 a.m.

Join Us For The Virtual Talk

Following her talk, she will meet with students individually for portfolio reviews. Please contact Professor Vanni at lvanni@nullcecil.edu if you would like to schedule an assessment.

Patti was born in Dayton, Ohio, and graduated from the University of Dayton. She lived and studied art in numerous cities until she finally settled in Maryland in 1987. She currently resides in the Fair Hill region of Maryland.

Words and letters have always interested her, and she took her first calligraphy class while studying at the University of Dayton. Since then, Ms. Paulus has been a member of various guilds and continues to grow artistically by studying lettering, drawing, painting, and design with artists from all over the United States, England, Italy, and Germany. She has been actively working as an artist since 1982. Her primary art form is hand-lettered artwork, although over the last few years she has been focusing a lot of her artistic time and development on drawing with charcoal – particularly landscapes. She considers herself to be a constant student.

Patti’s work is shown on a continual basis at ‘The Palette & The Page,’ a downtown Elkton Gallery she owns with three other women. The Elkton Main Street gallery opened in late 2009, and in 2011 officially became known as The Palette & The Page, LLC. In 2014, The Palette & The Page was selected as the 2014 Small Business Award Winner by the Elkton Chamber & Alliance. She is proud to be a part of an establishment that shows the work of numerous local artists,